Gobichettipalayam, mercifully commonly known as Gobi (pronounced Gopi) is 400 kilometres south-west of Chennai. It has a population of a little over 65,000, with 2.5% of the population being Christians, 90.3 % Hindus and 7% Muslims. The relatively small FBHC church there is pastored by Pastor P. Peter, who is also the treasurer of the Fellowship and has about 40 members from 15 families. Please pray for Pastor Pater, as he ministers so far away from other FBHC pastors.

Pastor Peter has sent some pictures of their Christmas celebrations, to which the senior Police officer in the town had been invited as a matter of courtesy and goodwill. As is usually the case, the children played a large part in portraying the story of the birth of Jesus.

The Fellowship of Blessed Hope Churches’ church at Periyakulam is 490 kilometres to the south-west of Chennai and is located in the foothills of the Western Ghats (mountains) at an elevation of 282 metres (925 feet) above sea level. Pastor T. Daniel, the pastor at the church continues his ministry with an emphasis on reaching out with the Gospel to villages which surround their town, and they have already begun services in one nearby village called Chemman Kuzhi. He is also concentrating on nurturing and teaching the young people in his church and in the villages that they visit.

Pastor Daniel has sent a picture of a special youth meeting held in Periyakulam on 26 January. 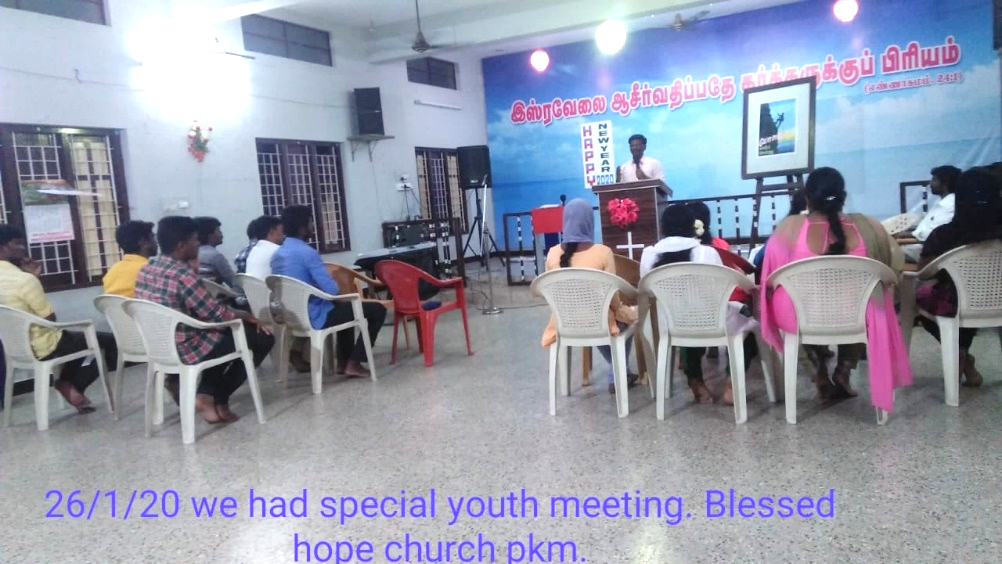 Please pray that the Holy Spirit will work in the hearts and lives of those who are contacted, to bring some, perhaps many, to faith in Jesus Christ as their Saviour.