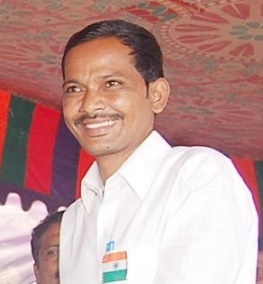 Rev. Pastor B. Balu Nayak is the founder and leader of a ministry called BALUNAYAK BANJARA TRIBAL MINISTRIES in the Telengana State in southern India. He is ministering in three separate areas – he has established and built church buildings in Mahabubabad, where he lives, and in Baluthanda, and ministers in Salarthanda as well.

The Banjara Tribe is a downtrodden tribe in the community. They are also called Lambadies.  They speak a tribal language – a mixture of Telugu and Marathi.  They live in thatched huts with mud floors plastered with cow dung.  Some have managed to build small houses.  Agriculture is the only source of income for this people.  Some have sheep and buffaloes.  Many of the women of this tribal community have lost their husbands due to liquor consumption, so they need to work to look after their children.  Women wear silver ornaments and plastic bangles in their arms and wear colourful dress.  If a woman wears bangles from her shoulder to her wrist it shows her husband is alive and if she wears bangles from her elbow to her wrist it shows she has lost her husband. (See picture below) 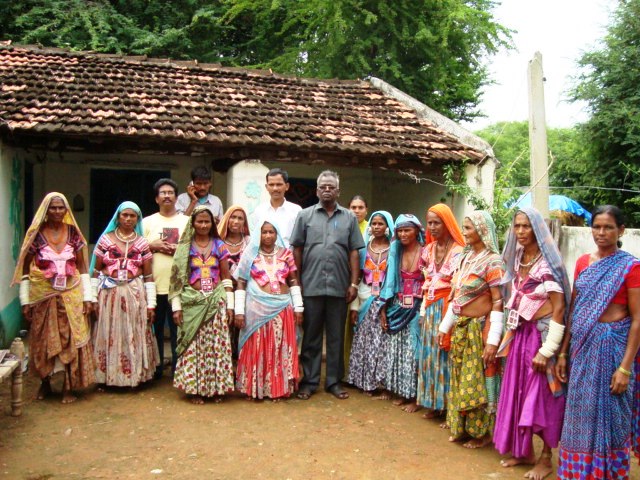 Pr. Balu Nayak belongs to the Banjara tribal community himself.  He has a wife, Mrs. Swarna Latha, a daughter Sowmya (10 yrs old) and a son Bharath (5 yrs old).  (See picture below) 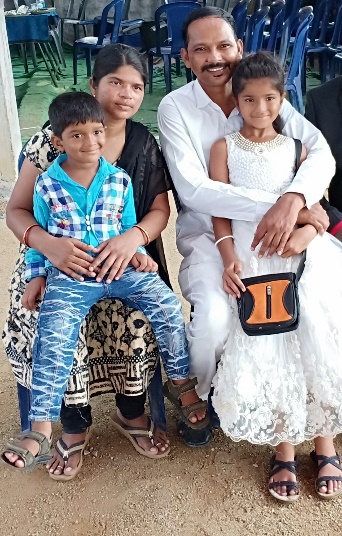 He lives in a small rented house.  His father (who together with his mother was illiterate) was village head and his grandfather was also village head and similarly Pr. Balu Nayak is now village Panchayat (Village Council) head.

Pastor Balu Nayak describes his people as follows in respect to their religion.

“My forefathers belonged to the Hindu religion and belong to the Scheduled Tribes community.

We sacrifice sheep and goats for Hindu tribes’ goddesses namely 1) Seva Bhaya, 2) Merama Bhavani, 3) Twalja Bhavani, 4) Sithala Bhavani, and 5) Hingla Tall. Our tribe’s people make the above gods with stone and silver and stand them under the neem tree and sacrifice sheep and goats for them every year. This is our traditional tribal community festival.  I am sending a picture of stone worship system at our Tribal Community of Telangana State (pictured below) 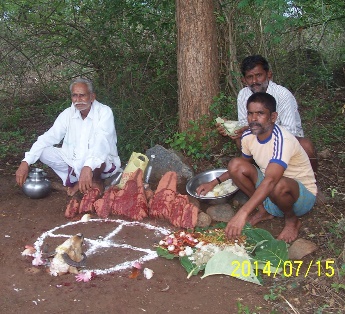 Most of our tribal Community people prepare alcohol in their house, and males, females and children five years and older all drink alcohol. Due to drinking alcohol continuously, people from children up to old age fight and quarrel in our tribe’s villages. Several times some people die from quarrels/fights in our tribe’s community.

Our tribe’s people depend 90% on agriculture and also do agriculture labor work for their livelihoods.

80% of our tribal people are illiterate – they don’t know to read and write. 20% don’t know our state language they speak only Tribal Banjara Language only

I was born and brought up in this idol worshipping, tribal community/family.”

Balu Nayak heard the call of the Lord to ministry seventeen years ago and has been ministering the Gospel and carrying out various social services for his people since then. He writes of his coming to faith in Jesus Christ as follows…

“When I was studying in the 10th standard I got a heavy fever with stomach and back pain, my father joined me in Mahabubabad hospital.  The Doctor checked  me and gave me three days treatment for fever and pain level but the situation worsened and I went into a coma. I was sent to the Kidney Center at Khammam Hospital where my father joined me – he was very sad and cried. The doctor did many tests and told my father that my right kidney was damaged and I needed another kidney, and that my health condition was very serious and that I needed kidney surgery as soon as possible and that the cost would be 125,000 rupees {now about US$1,800}

Our family belongs to a very poor – poverty background. We did not have financial sources. My father and mother depended on daily agriculture labor work for our daily livelihood. Already much money had been spent for my treatment. Day by day my health position became very critical. My Dad heard one of our neighbors talk about Jesus and he said to my father. “If you go and meet Pastor Joshi James it will be good.”

My father had struggled so much about my kidney disease. He had tried to find money from debt /loan from others. Later my father decided to go to C.B.C. {Centenary Baptist Church} in Warangal and meet Pastor Joshi James. He took me to the Pastor, then pastor prayed about me and said “you will surely get healed”. We stayed that night in Warangal at C.B.C. hostel room. Next day both my eyes opened and I felt better. Again we met Pastor Joshi James and he prayed for me the second day.

After two days, at night I was asleep at midnight. The Lord Savior Jesus Christ appeared to me and spoke to me “You’re my son. I am your Father. Now I am healing your kidney disease.” The Lord showed me this verse “For I will restore health unto thee, and I will heal thee of thy wounds, saying, this is Zion, whom no man seeketh after- Jeremiah 30:17

“PRAISE THE LORD” Next day I started to walk, and I felt very good. My father and my whole family were so happy. I decided that the Lord Jesus is the real God.  I accepted the Lord Jesus Christ as my personal savior,

I got salvation and my whole family came to salvation in Jesus and removed all our tribal goddesses from our house. I took baptism in 1997. I started to join in Sunday services in C.B.C. Church.

In his school days Balu Nayak was inspired greatly by Mother Theresa, Mahatma Gandhi and others who served their people, and has grown a deep desire for helping the poor and the oppressed in the community.  He loves his community and shares with them the love of Christ.  He is well known among Doctors, Police Department and political parties for his service to the poor.  He has very good name among authorities; he was even offered a seat in an election, but he refused in order to serve God and the poor.  He conducts free Eye Camps every month and does Plantations, {plants saplings of different trees for future generation to keep up the greenery environment.} and creates awareness among the people about the dangers of liquor consumption.  He conducts prayer meetings and worship services in open places in the surrounding villages.  It is very hard for him to conduct these meetings when it rains!

Brother Balu Nayak conducts a full range of Christian services and activities in his churches in Mahabubabad, Baluthanda, and Salarthanda. He is also the founder /General Secretary of the Mahabubabad District Pastors’ Fellowship Association. He is the Christian Leader among the churches in the Telangana State – if people from any other religion such as Hinduism or Islam attack Christian pastors or damage or destroy church buildings or trouble Christians, as the State leader he is involved in trying to solve the problems without involving the police and seeks to create a peaceful atmosphere between Christians, Hindus and Muslims.

He is also involved in counselling alcohol and drug addicted people and supporting school dropouts and showing Jesus’ love and sharing the Word of God in his Tribal areas. He has been doing village evangelism, in tribal areas showing the Lord Jesus Christ’s love, preaching and teaching and sharing the Gospel, especially with films – he has reached 150 tribal villages.

During the last two years Yesuway Jeevan Mission has been able to send Brother Balu Nayak funds raised by the ACGC’s Bread of Life program from time to time, and he has been very diligent in using these funds in feeding the poor – adults and children – in his area. 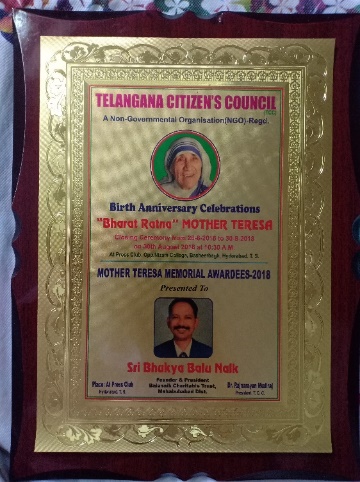 Brother Balu Nayak’s efforts in showing care and compassion for the needy have been recognised by members of the community and also by his country, his State and local authorities, and his efforts have been publicly recognised as follows…

…in 2012 he was awarded the “Mahatma Gandhi National Peace Award”

…and just recently, in 2018, he was awarded the “Mother Teresa Memorial Award” for “Best Social Services continuously in the Mahabubabad District.”

Pastor Balu Nayak asks us to pray as follows…