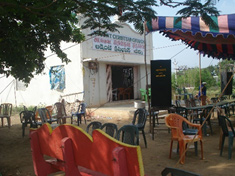 Pastor Paul Gantham is the leader of the Adda Road Advent Christian Church, an outreach ministry of the Advent Christian Conference of India and a ministry partner of Yesuway Jeevan Mission which ministers in Andhra Pradesh. Andhra Pradesh is in South India on the northern border of Tamil Nadu, and is one of the 29 states of India. The official language of this state is Telegu. People depend mostly on agriculture and they live a very simple lifestyle.

Pastor Gantham shares his ministry with us:

“Born in Andhra Pradesh in 1969, I began my ministry among the tribal village people in the area around Adda Road 13 years ago. My mother passed away when she gave birth to her one and only son; however, my father took very good care of me and I did my schooling in a government-owned school. Later on, I married Aruna, and we were blessed with a son, Victor Abraham.

Years ago, I went to Chennai Government General Hospital for an operation as I had been suffering from appendix and kidney problem, and doctors advised me to have an operation. While in Chennai, I heard about a gospel meeting conducted by Rev. Dhinakaran and attended the meeting. It was there that I was healed and dedicated myself to the ministry. I attended Agape Bible College, Andhra Pradesh, for three years and then completed a one-year correspondence course at Seminary Bible College, Chennai.

In 2005, I began my ministry among the village people in my home place called Usthamvari Village, Adda Road. At that time, there was hardly 10 people in my group and now there are more than 255 people in the church. I am also conducting ministry in five other places in surrounding areas: 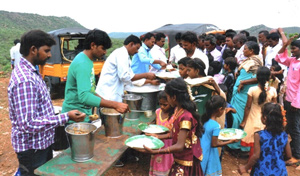 Apart from this, we are conducting a healing and deliverance ministry on Calvary Healing Mountain every second Friday; more than 500 people attend these meetings. Feeding the poor programs (supported by International Missions Bread of Life mission project) are conducted in five places regularly. Though people are interested to see the Jesus Film, approximately 10 people from our church also visit tribal village people and perform dramas to help the people understand the gospel easily.

VBS is conducted every year with 500 – 700 children attending these classes. Eighteen teachers are involved in this ministry to bring children to Christ. We stay for two to three days in a village and conduct prayer meetings and provide them food and cool drinks.

Along with me, my son Pastor Victor Abraham (age 27) and three others: Brother Samuel (29), Brother D. Joseph (24) and Sister Swapna (22) provide regular follow-up ministry. Our team visits the tribal villages by auto-rickshaw and two-wheelers, which are now available.

On one occasion, I was interrogated by 500 men. Not knowing that they belong to an anti-religious group, I politely responded to them that I was teaching the people to love one another. After that, they left without causing any trouble.

As we minister, several miracles have wonderfully blessed us recently:

Pastor Gantham asks that you join with them in prayer for the following: