Pastor B. Balu Nayak, leader of BALUNAYAK BANJARA TRIBAL MINISTRIES in Mahabubabad, in the Telengana State recently advised Mission Manager Immanuel that on 30 August “…by God’s grace and all your support I was awarded the MOTHER TERESA MEMORIAL AWARD” at a function in in Hyderabad, the capital of the State of Andhra Pradesh. He advised that the award was for the “Best Social Services continuously in the Mahubababad District.” 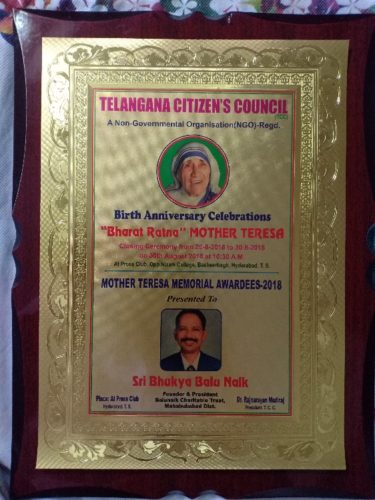 Brother Balu Nayak advised that he was dedicating this award to Immanuel because “Ayya, really you have so many times supported me for doing Social Services here like Food for poor programs continually. Ayya I will never forget your financial support in my life long, and I hope you will support me regularly for both social and spiritual activities doing in our area in Telengana State. This award credit goes to you only.”

Brother Balu Nayak has been doing social services for 20 years, since he was 16 years of age, and was inspired in his teens by the ministry and services to the poor that were carried out by Mother Teresa and her helpers in Kolkatta. In 2012 he was also awarded the MAHATMA GANDHI NATIONAL PEACE AWARD for his social services to the underprivileged in his state.

Yesuway Jeevan Mission is able to send Brother Balu Nayak a modest amount of money each month to assist with his congregation’s ministry and from time to time he receives funds from the ACGC International Missions “BREAD OF LIFE” program which he uses to provide food for the homeless and poor in his city.

Please continue to pray for Brother Balu Nayak and his congregation as they share the message of the Gospel and do what they can to relieve the suffering of the very poor and homeless in their community.