Since mid 2013, Pastor Lawrence has been ministering to the tribal community named IRULAS which is an oppressed and marginalised community in Indian society. They live in southern parts of India, particularly in Northern Tamil Nadu districts Kanchipuram, Thiruvallur, Thiruvanamalai, Vilupuram and Cuddalore, then in Pondicherry union territory. The Irulas are the Pre-Dravidian inhabitants of the scrub jungles of southern India. They are living in every region as a group. Their main basic profession is snake and rat catching; rat is a favourite protein meat and snake is the economical source. 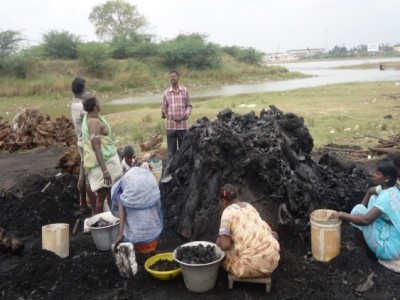 Hunting is their traditional duty. Irulas have significant knowledge of medical plants. Medical plants, which have medicinal and nutritional utility, are known in their culture and specific programs are used to treat a variety of illness and promote general good health in their communities. This kind of medical work helps them to cover their income. The primary source of income is snake catching and venom; they earn very few by the snake skin selling because they don’t know the value of skin. Often they are cheated by the buyers. After the Indian wildlife protection act of 1972, they suffered a lot through loss of income.

They have adapted themselves as bonded labourers to rebuild income. Still many Irulas are bonded labourers in rice mills and brick manufacturing units; some Irulas are self-employed as fire-wood cutters, charcoal making, fishing work, daily wages (coolie) workers etc. Sometimes they are working 18 hours continually in mills. Charcoal making is one of the self-supporting wages for the Irulas – they bury and burn certain types of wood to produce charcoal.

During the summer vacation time in May, Pastor Lawrence and his wife Ruth conducted Vacation Bible School for the children of the Irulas living in Kanchipuram, a district close to Chennai. He reported as follows…

“Greetings to you in the matchless name pf our Lord and Savior Jesus Christ.

It’s my great privilege to share my VBS report to you. To the glory of God past four years I have been concentrating on the IRULAS ministry. Some of them have accepted Jesus as personal saviour. In that area this year VBS was conducted and 35 students participated. I have attached some photographs to you.

Please kindly pray for my future vision and mission.
Thanking you
Yours in Christ
Rev. P. Lawrence”