Greetings to our friends, supporters and prayer partners, and once again my thanks for your support and encouragement in so many ways, and especially for your prayer support for the workers in Advent Christian ministries in India, Malaysia, Myanmar, Thailand and the Philippines.

As reports have come in over recent weeks it has been again encouraging to see indications of your prayers being answered and evidence of the work of God’s Holy Spirit in many areas of ministry.

Our focus has not been so much on ministry in the past few weeks, although that has continued, but on the weather in Tamil Nadu and in Chennai in particular.

Chennai and its suburbs, home to about 9 million people, where most of the Advent Christian ministry in India is centred, is presently experiencing very serious flooding caused by the heaviest monsoon season rains that have been experienced in the city for more than 100 years. 1.22 metres (48 inches) of rain were recorded in the city in the month of November and it has continued to rain very hard for the first few days of December. There were a few days of fine weather early this week but it is again raining, although not as heavily as earlier. Monsoon rain in India is unbelievably torrential!

Chennai International Airport’s runways were flooded and the airport was closed for a week; there was so much flooding from the rain and the resulting flooding of the two major rivers that run through the city that buses and the local train system were not operating; power was cut off in most areas of the city for about 10 days but is now restored (no power = no computers = no email!); the landline phone systems and many of the mobile phone system towers were and are still out of action (it was fortunate that the BSNL mobile system which AAM and Mission Manager Immanuel use was the only system still operating so he has been able to contact me daily). The armed services were called in to assist those in danger in the city and to get food parcels to those who were isolated. As at Monday 7 December government announcements indicated that 272 people had lost their lives in the city and surrounding areas because of the flooding and they estimate that nearly three million people have been affected in some way, with many losing their homes and belongings.

Where possible Immanuel has been in contact with the leaders and pastors of the two AC conferences and as far as we know all personnel are safe and sound but some churches have had flood water through them, as have the homes of many, many members. Some of the AC CI and FBHC churches are sheltering those who have been flooded out of their homes in the communities around their churches and they are doing their best to care for them as far as food and shelter are concerned. The Mission compound at Guindy was flooded but all who live there are safe and sound. The house of one staff member who lives off the compound has been flooded and damaged by the rain. ACGC has sent some funds from their Relief Fund and this will be used to assist some of those from our churches who have been badly affected.

Please pray for our brothers and sisters in Christ in Chennai and of course also for all those who are affected – this will be a wonderful opportunity to show Christian care and compassion to those who are suffering.

However, God’s people have continue to minister and there has been blessing at His hand.
On 29 November YJM staff member Rajan attended a special service at the Advent Christian Conference of India’s church at Tharamani in response to an invitation from Pastor P. Johnson, to gift and distribute New Testaments to 15 of their Sunday School children – YJM is always happy to distribute copies of the Scriptures to the Lord’s people. ACC President Rev. Francis Thangadurai (Pictured below left distributing the Testaments) was also present at the service and he informed the congregation that he had ministered at that church as a young man.
The ministry at Tharamani was started in 1947 as a children’s ministry under the shade of a large tree. Then in 1980 a thatched shed was erected and church service was started and this was followed by the building of a permanent church building. At present the congregation consists of about 50 members from 25 families.

Please pray for these children, asking the Lord that their reading of these Testaments will bring them to accept Jesus Christ as their Lord and Saviour. 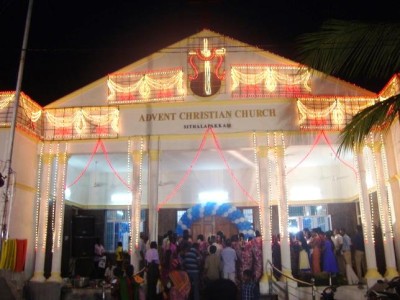 Then on 5 December, in spite of the rain and flooding, Mission Manager Immanuel attended the dedication and opening service of a new church building for the Advent Christian Conference’s church at Sithilapakkam. ACCI President Rev. Francis Thangadurai declared the Church open by cutting the ribbon. Immanuel had the privilege of releasing a white dove into the sky as a mark and prayer for peace.

This ministry was started in 1928 by Pr. Abishega Nathan. A small hut was built and people began meeting there for prayer. In 1933 Rev. K.J. Benjamin conducted prayer meetings in a thatched shed. In 1955 Missionary Mary Ruth Bosley White and Indian Bible Women began ministering and preaching Christ by visiting homes in the area. By 1962 many children were attending Sunday School, people were giving their lives to Jesus Christ and were being baptised. Then a church was built and as the ministry has continued the congregation has grown to about 55 families with around 250 members and the new, larger building became necessary. The present Pastor is Rev. S. A. Andrews.

Please pray that the ongoing ministry of this church will continue to bring members of their community to know Jesus Christ as Lord and Saviour.

On the first weekend in December, the team at Christian Mission again took their Soup of Love to the needy folk in their own village – Naratchakwai. As they do this they also take the opportunity to hand out Christian tracts to those who receive the soup. Team leader Ploy commented…

“Today, we were in Naratchakwai village. It’s very good to see some people come to us and say “It’s a long time [since we] ate your Soup of Love. It’s still delicious.” Wow, thanks God for everything. We are happy to do this every month.”

Some of the Christian Mission members attended a joint meeting of all the member churches of the Christ for All People Churches Association held at Koodsakoi, Sakhon Nakorn from 4 to 6 December.

Pastor David, leader of the Fellowship Bible Church Myanmar, a member of the Advent Christian Conference of Myanmar, asks for prayer for one of his group’s church planters who is ministering from a house church. He wrote (emphasis mine)…

“Greetings and this is our church planter in our ministry. His name is John F and he is working hard in his ministry. Please pray for him.” 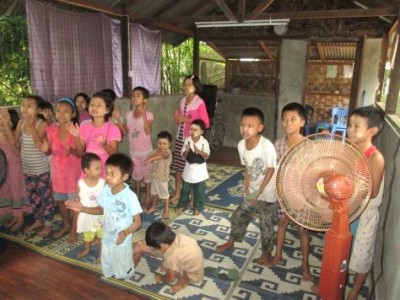 As you pray for Brother John F, please remember all of the church planters which the four member organisations of the Advent Christian Conference have serving the Lord in many parts of their country. Many of them are in very remote areas, with little regular communication. They travel long, arduous journeys once a month to be able to communicate with their bases and receive support funds. 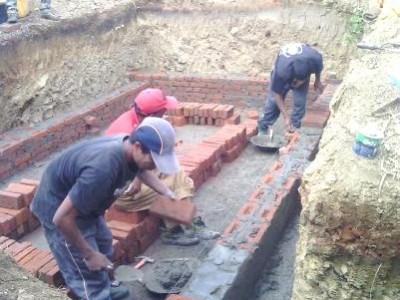 Pastor Timothy wrote to advise progress on construction of a large water tank to assist the residents of the town of Hakha in the Chin State who were so badly affected by the floods in July. He wrote…

Greetings to you in our Savior Jesus Christ. Suu Kyi’s Democracy Party won in 8 Nov election. All people are very happy and hoping for real democracy in Myanmar. Please pray for new government. My team is continuing water tank for flood victims in Hakha. Thanks for your prayers.”

Please continue to pray for the small group of faithful Advent Christian believers who gather weekly for worship in the home of Sister Ruth Devairakkam and Brother Wilfred in Kluang and who gather in members’ homes for Bible study and communion during the week.

“Thank you so much for your supportive prayers.
PRAISES TO GOD
1. During the time of heavy haze for the past few months, many of our friends, Christians and non-Christians, called for prayers. They were not well because of the haze. Praise God, all of them recovered fast and were able to resume their work after medical leave.
2. Some of our non-Christian friends requested prayer when they were undergoing difficult situations. They had a personal encounter with Jesus, and were delivered from dangers they were not aware of. There is an awakening in their spiritual sensitivity, and we are now having a closer interaction with them.
PRAYER REQUESTS
1. Please pray along for our one-on-one evangelism, so that the Gospel shared with them will take root in their hearts, and they will come to the saving knowledge of Jesus.
2. A non-Christian friend of ours who attended our Sunday School in the 1970’s recently requested our prayers because she lost her beloved father and then her daughter through her daughter’s divorce after one year of marriage. Her trust and hope over the people whom she trusted most has been shattered. We encouraged her with God’s Word and directed her to Him. This is leading her to trust Jesus. She came with her family to visit us, even though she is from out-station. We met her after so many years. She often calls us up. She is recovering from her painful experiences. Please pray that God will give her His power to fight every battle in her mind, strength to endure and persevere, and give her the answers and direction she needs as she calls upon His Name.”

Once again, my grateful thanks for your partnership in the Lord’s ministries in South East Asia. On behalf of those who serve the Lord in South East Asia I thank you for your prayers and encouragement to and financial support for our brothers and sister in the LORD during this year that is about to end.

My prayer is that you will enjoy a very special time of blessing as you celebrate the First Advent of our Saviour Jesus Christ with family and friends and that you will know the wonderful peace and power that comes with the presence of God as we wait through the New Year for His Second Coming.
God bless you as you serve Him in Missions by your prayers and support.