You are here: Home / Newsletters / MYANMAR | a positive story from the recent flooding!

During the past few weeks, the leaders of the Advent Christian Conference of Myanmar have sent me more than 200 pictures, many of which graphically portrayed the terrible damage and heartache that Cyclone Komen brought to hundreds of thousands of their people in the western States and Divisions of the country. We have been able to put only a few of those pictures up on our website.

The one picture which tugged most at my heart was the picture below, and as I first looked at it I tried to imagine what would have been going through that girl’s mind as she clung to the top of what looks like a coconut palm tree. Looking at the size of the trunk of the tree where she is clinging, I estimate that the tree could possibly have been 15 to 20 feet high so the water was obviously very deep and strongly flowing at that point. She must have been terrified and feared for her life! I am sure that I would have been in such a situation! 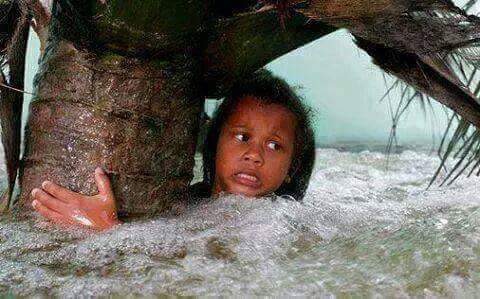 The picture was sent by Pastor Joseph, who is President of the AC Conference this year, so I asked him if he knew whether the girl had been saved. His reply is as follows…

She said that someone is holding me while the flood was coming on me. We believe that that was the one who we served, our almighty God. I believe the one who hold her was our living God. I tell to many people that God was with us when we pass through the waters, and through the rivers, they shall not overflow you, when you walk through the fire, you shall not be burned.”

The girl’s name is Aye Aye Moe – you may like to pray for her that somehow she will come to know personally the love of the One who Joseph believes was holding her up during those four hours of suffering.

As he wrote to thank us for the financial aid that we had sent to enable them to assist practically some of those who had suffered and lost so much through the effects of the cyclone, Joseph wrote…

“Thanks for your love. We preached to 250 over people about the salvation of Jesus those who are affected through the flood waters.
Joseph”

You may like to pray for those with whom Joseph and his fellow Advent Christian Conference leaders and members shared the Gospel as they assisted them, praying that some, or many, may somehow be led to know the Lord in a personal way because our people were obedient to Jesus’ enjoinder in Matthew chapter 26 “…whatever you did for one of the least of these brothers of mine, you did for me.”
(Ernie Schache)