Mission Manager Immanuel was once again invited to attend a baptismal service recently – at an Advent Christian Conference of India church in suburban Chennai with an interesting connection to ACGC. 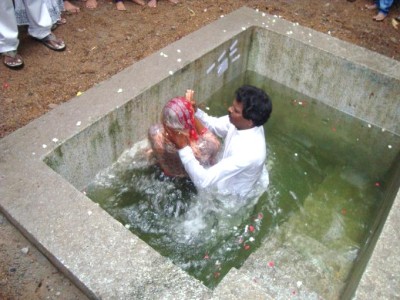 The church is at Palavakkam and is presently pastored by Rev. Gnanaprasad (pictured baptising a candidate), and presently has 82 families or about 350 people in membership. Seven persons were baptised on 2 August and were received into membership and received their first communion. Immanuel presented each of them with a new Bible as recognition of their baptisms and as an encouragement in their Christian life from the Mission.

The church was started in the early 1970s when a small “shed” was built and a small number of believers began worshipping there. Toward the end of the 1970s a team of young people, both men and women, travelled from the United States under the auspices of Teen Missions International, with Brother David Vignali as part of the leadership of the team. 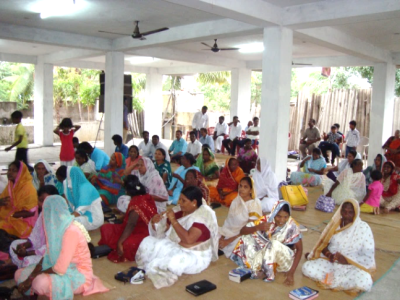 The team built a new church building in permanent materials for the congregation and according to the dedicatory plaque it was dedicated, on 14 August 1977, by Rev Roland Griswold who was then Director for Youth Ministry for the Advent Christian General Conference. All that remains of that building now is the frontage, seen in the picture below, as the size of the congregation is such that a much larger building is partially built – the congregation is currently meeting (see picture at right) in the unfinished ground floor, which will ultimately be used for parking. When the building is complete the first floor will be used as the church sanctuary and the top floor will be accommodation. Provision has been made for the installation of a lift at a later stage. The total budget for the project is 20 crores (20 million) rupees – approximately NZ$467,000 or US$310,000.

Please praise the Lord for the growth of this ministry and pray for the Lord’s blessing on the continuing proclamation of the Gospel by Advent Christians in the Palavakkam area and in many other areas of the huge city of Chennai.