Mission Manager Immanuel has advised that he has been having discussions with a potential new ministry partner in the State of Odisha, and will be travelling there in the next few weeks to meet Pastor Ahajkumar Pani and his family (pictured) and to visit some of the ministries he is involved in. 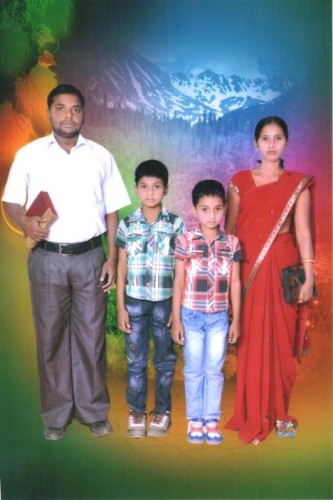 Odisha is the new name for what was previously the State of Orissa, which is located to the north-east of the Tamil Nadu State, and on the coast of the Bay of Bengal north of the State of Andhra Pradesh. The 2011 national census put the population of the state at 42 million. The same census indicated that approximately 2.4% of the population are Christians. Over recent years Christians in the state have been under very severe persecution from radical Hindu believers, and have had very little support from the authorities during that persecution. Pastor Ahajkumar Pani’s ministries are in the Jharsuguda District which is in the north-western corner of the State.
Pastor Ahajkumar Pani, who has been ministering in Odisha since 1999, is obviously a very busy servant of the Lord – his “home church” is a small church in the city of Jharsuguda which has 40 believers. He has five village ministries – Baghamar with 50 believers; Gandichow with 20 believers; Coal Mine Lares with 120 believers; Belephara with 75 believers and Bandbahal with 27 believers!

Please pray for Immanuel and Rev Paul Aruldoss who will accompany him as they travel and as they fellowship with Pastor Ahajkumar Pani – for travelling mercies and for wisdom as they consider a possible future relationship. Please thank the Lord for Pastor Ahajkumar Pani and pray for him and his family as they minister in what are very difficult circumstances. Pray also for their believers, for whom there will be ongoing persecution and stress because of their faith.