When World Outreach Director Rev Jeff Walsh and I visited Pastor Kirubakaran’s New Life Hostel at Thuthikulam, near Namakkal, in February, they had just had a visit from a group of government officials from the department which handles the regulation of orphanages and children’s hostels. Pastor Kirubakaran and his team of helpers had been advised that at the end of the then current school year, the hostel would need to be closed as it did not comply with government regulations in a number of areas, and that it could not be re-opened until those matters had been rectified.

Pastor Kirubakaran was of course very disappointed by this situation but he reminded us that his inspiration for his Christian ministry and particularly his care for orphan and underprivileged children was the well-known, early 20th century Christian missionary Miss Amy Carmichael, who had given much of her life to assisting underprivileged Indian girls and young women in the southern part of Tamil Nadu State. He expressed his determination to do all he could to meet the requirements of the government and continue his ministry of care and compassion. With sadness he had decided that in their present, rented building he would be unable to meet the government’s requirements for separation of girls and boys and would in future be able to care only for boys.

The list of requirements of the government covered record keeping, details of menus and similar “red tape” matters covering the day to day care for the boys, but also included a number of capital items which were considered essential if the care of the children was to be considered adequate. Some of the items required are relatively low cost, but there were some fairly expensive items including a new refrigerator and a new electric stove.

Because of a generous gift from a supporter in New Zealand, ACMissioNZ was recently able to remit funds to enable Pastor Kirubakaran to purchase a new refrigerator of the required size and quality. YJM staff member Deveraj recently travelled to Thuthikulam to take the funds and to assist Pastor Kirubakaran to locate, purchase and transport the much needed refrigerator to the hostel. Please praise the Lord that this item has been able to be crossed off the list. Please pray that the Lord will provide all that is needed to allow the hostel to re-open after the summer school break at the end of May.
(Ernie Schache) 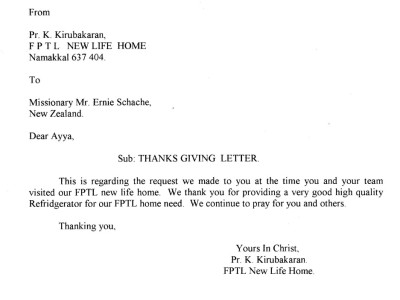