Dear friends, supporters and prayer partners,
Since my last update in early December, Christmas and New Year have come and gone, as has one month of 2015 already! Reports about their Christmas celebrations have come in from some of those in the countries in Asia which we pray for, so I share these with you…

Yesuway Jeevan Mission Manager Immanuel reported that the Mission once again provided a Christmas gift – a set of new clothes – for each of the children at the hostel, which is situated next door to the Mission Compound. 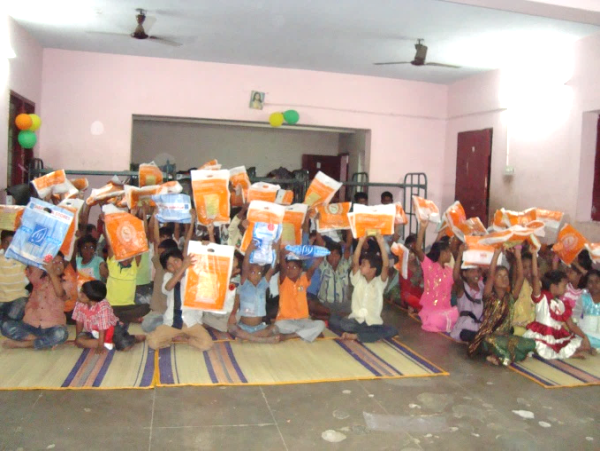 At that time there were 70 children living in the hostel – 50 boys and 20 girls. Immanuel advises that the government is introducing many new rules and regulations for maintaining hostels so the Advent Christian Conference of India is slowly, as circumstances permit, reducing the number of children in the hostel and at the school. The government’s new regulations require significant increased separation of girls and boys in hostels so the aim is ultimately to reduce the number living at the hostel to 50 boys.

The function was held on 18th December. ACCI President Rev. Francis Thangadurai, ACCI Treasurer Rev. Robert Selvakumar and Area Pastor Rev. Emmanuel Bakthasingh attended the function and expressed their appreciation to YJM for their continuing support of the hostel and for the Christmas gifts in particular. The children, including the children of the warden who also received gifts, were also very happy and appreciative of the gifts. Some of the children provided items.

The function was held before Christmas so that the children could wear their gifted clothes on Christmas Day. Immanuel advises that they wore their new clothes to the very early morning Christmas Day service. The Mission provided them with a special breakfast and later in the day they all left the hostel to go on their half-yearly holidays.

“PRAISE THE LORD!
Greetings to you in the name of Jesus Christ who was, who is and who is to come.
Once again we wish a prosperous New Year to all of you. Let God do marvelous things in our ministry and we thank all the supporters who are remembering us in your prayers.
In the year of 2014 God has done so many things in the Khagaria, Bihar Ministry in various ways. We dedicated three new churches, started two more tailoring centers in two villages and started new ministry in new places. All came from the grace of God. So please continually uphold us in your prayer so we can bring more souls to God’s Kingdom.
This month we have received 15 “Treasures” (Gospel IPods) that we have given to the prayer cell leaders (picture below left) to play among village people before or after the cottage prayer meetings.

In month of December we celebrated well by the grace of God. We sang carol songs on the roads of many villages and we shared the love of Jesus to the people. During this time we distributed many New Testaments and tracts to the people.
On 25th December, in our Khagaria main church, around 150 people gathered to listen to the Good News of Jesus. It was a really great blessing for them. During the service Sunday School kids performed dances and a skit with Santa Claus. After the Christmas worship service we had a love feast.”

BIHAR – WEDDING BELLS SOON TO RING!
When Pastor Denny Moses completed his studies and began serving the Lord in June 2007 as a member of Pastor Paul Sunder Raj’s team in the Advent Christian Conference of India’s outreach ministry in Khagaria, Bihar, what he saw of the people of the State, their culture, their low standard of living and their need of Jesus Christ soon brought him to dedicate his life to live and serve the Lord there. He recently told me that

“It’s been a blessed journey and I am happy in every way. I thank God for He has done wonderful things in my life till now. By His grace I’m still alive too.”

As he wrote those words in mid-December, he also went on to tell me that

“Once again God has blessed me by showing me my right Life Partner last month.”

As is still the custom for many families in India, Denny Moses’ parents and the Pastor of his home church in Chennai had been searching for a bride for him for four years. During that time there have been many disappointments as suitable, prospective brides were not willing to dedicate their lives to supporting Brother Denny Moses in his commitment to live and serve the Lord in Bihar, and/or prospective bride’s parents were not willing to allow their daughters to live permanently in a far-off, remote location such as Bihar!
His email message went on to say “But, God has His own time and I waited patiently and now I have got blessing from Heaven. My Life Partner to be is also dedicated to work in Bihar” 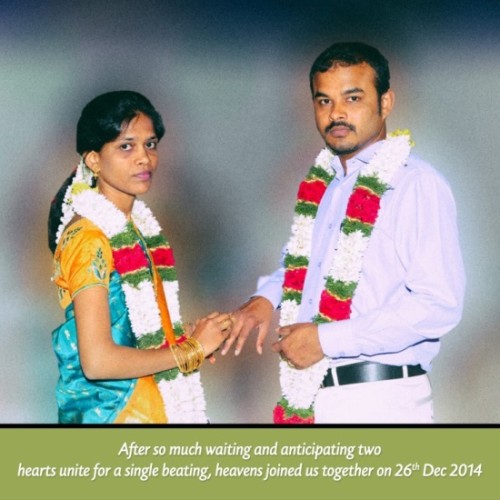 For 26 December Brother Denny Moses and family and friends travelled 590 kilometres south from Chennai to the city and district of Tuticorin (also known as Thoothakudi) to celebrate his betrothal (engagement) to Briscy.
Tuticorin is a seaport city at the extreme south-eastern corner of Tamil Nadu State and the Indian sub-continent, and is known for its pearl cultivation – an abundance of pearls in the sea offshore is the basis for a very large industry. From the same city, Brother Denny Moses has found his “pearl”!
The couple will be married on 29 May 2015, in the Advent Christian Conference of India’s “Cathedral” Church at Velachery, Chennai.

Please thank and praise the Lord for His blessings thus far and pray for the young couple and for the arrangements and financial provision for their marriage, and for their lives together serving Him in Khagaria, Bihar in the future.

Sister Ruth Devairakkam reported that she and her 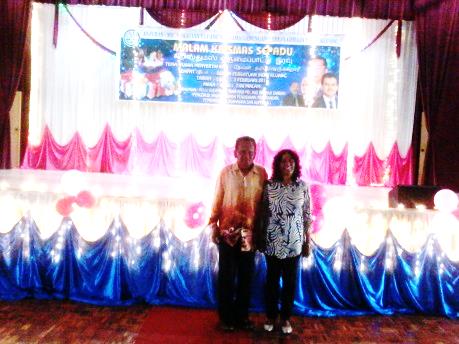 husband Wilfred represented the Advent Christian Church at a “Belated Christmas and New Year Dinner” sponsored by the Malaysian Indian Congress and organised by the Kluang Tamil churches on 3 February. 600 people attended the function. Ruth and Wilfred were invited to sing a Tamil Christmas song, with Wilfred accompanying them on the guitar.
Because of a generous gift from a supporter, late last year ACMissioNZ was able to send some funds to the AC Group in Kluang, Malaysia, to assist their ministries. Sister Ruth has advised, on behalf of her group, that the 653 Malaysian ringgits the gift bought were used to assist a needy student; to assist a poor family and to assist with transport charges for their ministry in their town. She supplied this picture of the children during their visit to the Agape Shelter, Kluang during the Christmas season ministry and to bring a little Christmas cheer to the children in a “Shelter Home”. Sister Ruth also commented as follows concerning the ministry of her group and seeks continuing prayer for the members of the group and their contacts… 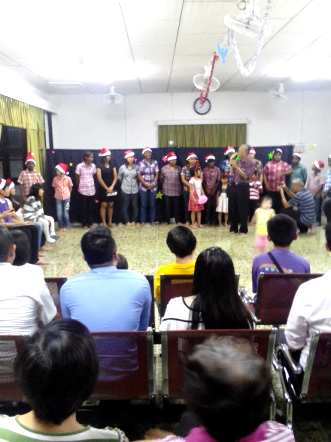 “Our ACC group in Kluang, Malaysia did one-on-one evangelism in 2014. This led three individuals to make a decision for Jesus. Presently we are doing follow-up for them. We have cell-group meetings weekly at my home and the homes of others.
Christian and non-Christian friends come to my house for prayer. We praise the Lord for answered prayer. We give thanks for your prayer team, for having prayed along with us. You are part of the blessings we are experiencing over here.
We also did some outreach ministry in a smaller town, in 2014. The picture at right shows my husband Wilfred and I singing at a house prayer meeting, during our outreach ministry. 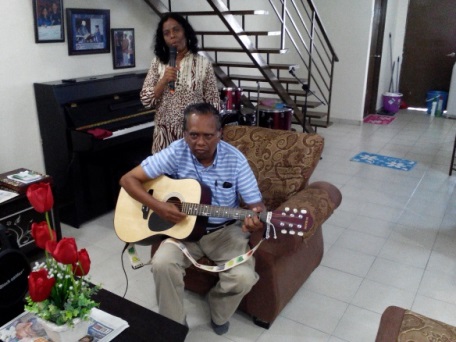 Regular ministries and services continue as they have done in the past – children’s ministries and activities and English lessons and preparation and rehearsals on Saturdays, and the morning service on Sunday, followed by a time of fellowship over a meal for all who have attended the service. The Soup of Love ministry also continues once a month, with the team taking nourishing soup to the old folk and those who are unwell in Naratchakwai Village and neighbouring villages.

Please pray for Sister Maeo, Pastor Boontaa and Sisters Bee, Ploy, Pan and Lita and for all who attend the services – adults and children – praying that the Lord will continue to minister to them all to keep them close to him.

ACGC’s World Outreach Director Rev Jeff Walsh and I will be visiting Nakhon Phanom from 16 to 20 February to have discussions with Maeo and the rest of the team at CMN concerning the future shape of the ministries and how ACGC can assist. We will also be having discussions with the leaders and members of the Christ for All People Churches Association of which CMN is a member and which the late John Middlewood was one of those instrumental in setting up. We have also had discussions with leaders of the New Tribes Mission in the area as CMN worked closely with them before the CFAPCA was set up.
We would appreciate your prayers both for the discussions during our visit and for wisdom and the provision of resources of all kinds including personnel, to ensure that the ministry can continue in north –east Thailand. 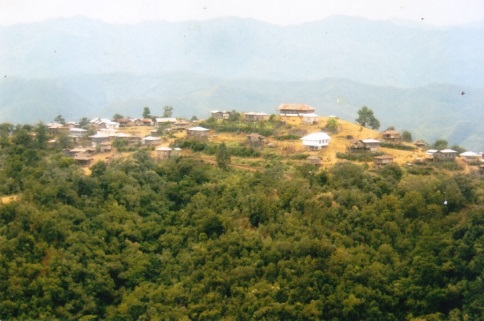 Pastor T has reported that about mid-December he and his wife and his elder son visited a village in his home state – the Chin State – to visit his wife’s father. Whilst there he also visited the village in the hills (Pictured at right) where Pastor Paul Ceu ministers. This is the village for which we were able, in 2013, to supply mosquito nets for all those who live in the village to help in their fight against malaria. We also provided funds to allow Pastor Paul to purchase a motor cycle to use as an “ambulance” to take those who need medical assistance to the nearest hospital, and thus avoid many hours of walking to get there.
Pastor T advised that “Bro Paul’s [motor] cycle is not much good now because it is very busy, (Pictured below left) the way is not good” He also reported that he “preached to all the villagers and had fellowship food with all the villagers.” (Pictured left below)

Once again, my sincere thanks for your partnership in the Lord’s ministries in South East Asia. I thank you for your prayers and encouragement and financial support for our brothers and sisters in the LORD in the past and I ask for your continued prayers for them and for their ministries during 2015.

God bless you as you serve Him in Missions in this way.