You are here: Home / Featured Project / The TREASURE for our Mission fields!

Thank you very much to those who prayed and those who sent gifts to provide “TREASURES” for Pastor Paul Sunder Raj’s ministry in Bihar, India. Because of gifts from the Lord’s people in New Zealand and the United States, 15 “TREASURES” in the Hindi language will very shortly be on the way to Chennai and then to Bihar, and 10, in two different languages, will be on the way to Myanmar.

John Middlewood at Christian Mission Naratchakwai, in Thailand, has also indicated that the TREASURES he has received are being well used to share the Word of God and has indicated that

he could find good use for more –

up to 10 in the Thai language and 6 in Lao for his contacts across the Mekong River from Nakhon Phanom in Laos.

If anyone or any church or group would like to assist with the provision of these useful gadgets, please see details about how you can do this at the bottom of this page.

We are hoping to raise funds for 15 Treasures at $63 NZ each:

Pastor Paul Sunder Raj  would like 10 to give to each one of the pastors in his Team in Bihar, India.

John Middlewood, Thailand would like to give 5 to his contacts in Laos  in their wilderness areas.

World Mission currently has over 185 New Testaments recorded in an audio format that can be placed on The Treasures and are adding new fully recorded New Testament languages every month. They have access to around 6,000 languages. As requests come in, more and more languages are being readied for  The Treasure. In addition to dozens of audio New Testaments they also have access to literally hundreds of languages available in audio with messages ranging from popular Old and New Testament stories, the Story of Jesus and a favourite audio tool—God’s Story! God’s Story is an 80-minute audio panorama of the Bible. The above options may be bundled on The Treasure as needed. Each unit can hold more than 60 hours of audio material.

The TREASURE can be used by evangelists, ministry leaders and church planters to share the Gospel message with those who cannot read or write or who do not have the Bible available to them in their own language or where there is no access to electricity to use other types of recording/playing devices. {Hover over the photo for the caption} 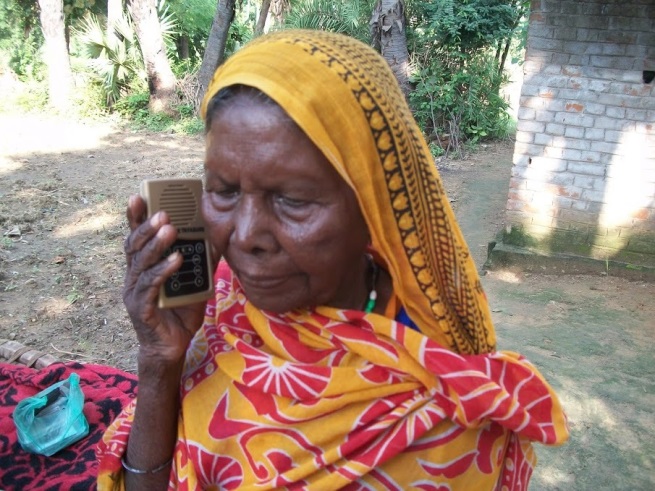 Bhuiya, a low caste Indian, has won many others to Christ 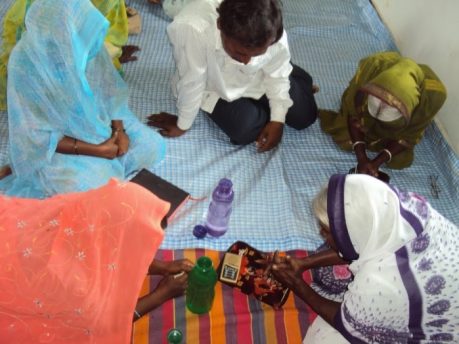 At an Indian Old Age Home 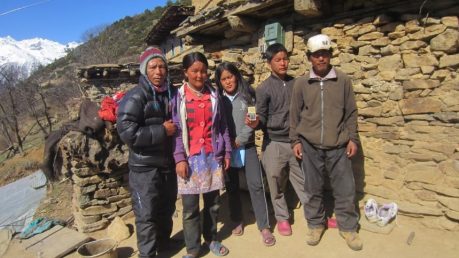 In Nepal, high in the Himalayas

A number of these have recently been distributed by ACGC’s World Outreach Department to Advent Christian ministries in Thailand, India and Myanmar and in Malawai, Mozambique, Democratic Republic of Congo and Nigeria. The early reports from those who have used them have been very encouraging.

“They are a gift of God and we thank the group that sent them to us. We are learning how to use them now.  Dtee is using his for self-improvement and when he goes out to witness. He says it builds his confidence also when he can play it for others to listen.

Pastor Boonta received one for his daughter {who is bed-ridden} to listen to. He also wants to use it when witnessing to others.

Yai Pah, from the Laobada Church says she and her friends gather at home to listen to it and she is taking it with her when she goes to the rice fields to work.

Maeo is using one to improve her Bible knowledge and plans on using hers also in witnessing to spread the Word of God.

Plans are now to visit seniors in our village – many who cannot read – to see if they would like to learn about God this way.

Again, thank you and praise God.”

John has also had some in the Laotian language and his contacts in Laos are thrilled with them and would like to have more “for their churches that are out in the wilderness.”

A TREASURE in the Hindi language was sent to Pastor Paul Sunder Raj’s outreach team in Bihar in India and their initial use indicated that they would be ideal for ministry to the many illiterate or semi-illiterate folk they minister to there in Khagaria. Pastor Paul has asked if he can have a further 10 so that he can give one to each of his pastors to assist them in their ministries.

The cost of a TREASURE is US$50 (NZ$63 at present) If anyone or any church or group would like to assist with the provision of these very useful gadgets, please contact our ACMissioNZ treasurer at glenise@slingshot.co.nz or me at ernie.schache@acmissionz.org.nz.

Advent Christian Mission NZ Trust  12 3051 0431074 00
Reference deposits with YOUR NAME and key word TREASURE and  send an email to glenise@slingshot.co.nz with your address.

ACMissioNZ passes on 100% of donations given to the causes we promote.