Because of a further very generous gift from an Advent Christian supporter in New Zealand, Pastor Roy Rocha who ministers in Novaliches in Manila, was able to again travel toTacloban, on the island of Leyte to minister for a third time to those affected by TyphoonYolande/Haiyan in November 2013.

After typhoon Glenda and Henry (local names) that affected Metro Manila recently, I was able to proceed to my plan to visit TACLOBAN last July 31st to August 5th. It was still rough and tough travel especially on the boat because there was still Low Pressure Area (LPA) that causes heavy rains and waves; still it was exciting, satisfying and God glorifying ministry.

I rate my travel this time as SPG. – S: because it was Successful, P: because I saw the Progress of the people we helped during previous visits, G: because it was God glorifying trip.

1st it was SUCCESSFUL; due to the fact that I was able to minister to people that are still living in tents. Getting to know them and hearing their stories broke my heart in tears and praying for them is the BEST way to comfort. Stories on how they survived the wrath of the typhoon, and now, they are facing on how they will survive on their own.

These two boys in the picture below left, namely Margarito and Rodmark Lingo who lost their parents during the typhoon, are now living on their own. Their uncle who is the pastor is helping them. They are living in tent. The local pastor and I have decided to help them on their studies so that at least they can finish high school. These boys are active youth leaders and in assisting their church program. They don’t have church building yet, that they meet in some of their members’ tents and temporary shelters. So they move from place to place every Sunday.

Another story is the couple in the picture above right. They are Mr. and Mrs. Edwin Ricaborda. Edwin is still in grief, as he recalled that during the typhoon, he heard his 3 year old son crying and calling out his name from the bush. He could have swim and helped his child but his cataract and the strong surge from sea water made him helpless. Now, he could not work anymore as his cataract worsens. They are living by the relief goods from time to time donors. His eldest son of 16 years old is forced to work in construction. Hearing his story made us pray and tears were falling from their eyes. As they don’t have enough supply for their daily needs, my pastor friend will supply them with rice weekly till funds last.

Secondly, it was PROGESSIVE; because the people we helped the last time made some good use of the gift we shared.

Mr. Joseph Pedrero, started to build his house. Picture below left is the progress of his house. He is a widower. Until now his wife’s remains and his son were not found. He is left with 8 year old son to care for. With the additional gifts, Mr. Pedrero said that he will put floor and walls of his house.

Another story of progress is the fishing boat.(Below right) When I arrived in Ormoc, it was dark already and was in time for the pastor and his members were ready to go out fishing and I was excited to stay in the middle of the sea for a night.  We were sad because there was another typhoon “Jose” coming and fishing boats were prohibited to sail.

The boat had already sailed around Leyte for 2 nights and a day after it was fixed. And it already went for fishing and already sold fish to their neighbourhoods. I was overwhelmed with joy upon hearing the progress!

3rd it is GOD GLORIFYING; our labor is not only meeting the needs of the people but the opportunity to expand God’s kingdom with the use of the fishing boat.

Adjacent to where the boat is docked in the picture is a lot where they proposed to plant a church. They will begin a church planting in the area to catch people that are coming from Small Island that are going to visit the mainland, Leyte. 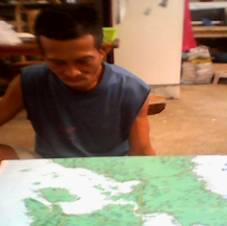 Another church plant is: as pictured right is Pastor Billy, showing to me the island that they are going to reach for Christ using the boat. A barangay in the town of Daram, Leyte where there was no church yet, even Catholics and other sects. It was believed that it was because of witchcraft prevalent practices. It all seems their plan was all set and they are ready to go by September. I told them that they will be fishing not only fish but men using the boat. Reaching souls for Christ is our greatest goal and it is going to happen and in fact it is happening!

To GOD be all the glory! All our efforts, prayers, and support are not in vain! It is always fulfilling to invest in God’s kingdom work.

Thank you very much for this partnership!

Thank you once again!