Earlier this year we made you aware that we had agreed to add a new ministry, in Andhra Pradesh State, to our list of ministry partners.

We have supported the ministry financially each month since then.

That ministry is BALUNAYAK BANJARA TRIBAL MINISTRIES  and is led by Rev. B Balu Nayak who is himself a member of the Banjara tribal community, and who is ministering in four separate areas – Mahabubabad, Baluthanda, Gorimella and Salarthanda. He is based at Mahabubabad.

Last month two of our YJM staff members, along with Rev Paul Aruldoss from the Advent Christian Conference of India, who first introduced this ministry to us, visited Mahabubabad and spent three days with Brother Balu Nayak. Below is the report prepared by Brother Deveraj, Immanuel’s clerical assistant at Guindy, along with some of the pictures that he took during the visit.

Please pray regularly for this ministry and for Brother Balu Nayak and his wife and believers as they serve the Lord faithfully in this remote area of India.

Commissioned to witness Pr. Balu Nayak’s tribal ministry, three of us – Rev. R. Paul Aruldoss , Bro. Raja and myself – departed on 18th of September 2013 by Charminar Express which started exactly at 06:10 pm. from Central Station and reached the next day at 03:30 am. It had been raining all the day and stopped just before we reached [our destination].   We were warmly received by Pr. Balu Nayak and his associate Mr. Uphendhar and they accompanied us to a very good Lodge where we stayed for another three days.

A small town surrounded with villages in all its directions.  The prime source of income for the people is agriculture.  Some have managed to start their own businesses like provision stores / hotels / furniture shops / tea stalls / vegetable shops / meat stalls / fruit stalls / used materials shops / medical shops etc.  There is a small Court and   a Police Station. Buses hardly come, people depend on autorickshaws and many walk to their work fields.The Andhra Pradesh Government conducts exhibitions, we were able to see stalls which created awareness to the people.  The population is small and the literacy rate is low.  Because of poverty and the absence of transportation people find it hard to take their loved ones to hospital when they fell into sickness.  On the other hand the rich oppress the poor in order to keep them looking after their cattle and sheep.  This is the reason why education is denied for these poor people and to those who are less privileged in the community.

Banjara Tribe is a downtrodden tribe in the community.  They are also called Lambadies.  They speak tribal language – a mixture of Telugu and Marathi.  They live in thatched huts with mud floors plastered with cow dung.  Some have managed to build small houses.  Agriculture is the only source of income for this people.  Some have sheep and buffaloes.  Many of the women of this tribal community lost their husbands due to liquor consumption.  So they need to work to look after their children.  Women wear silver ornaments and plastic bangles in their arms and wear colourful dress.  If a women wears bangles from her shoulder to her wrist it shows her 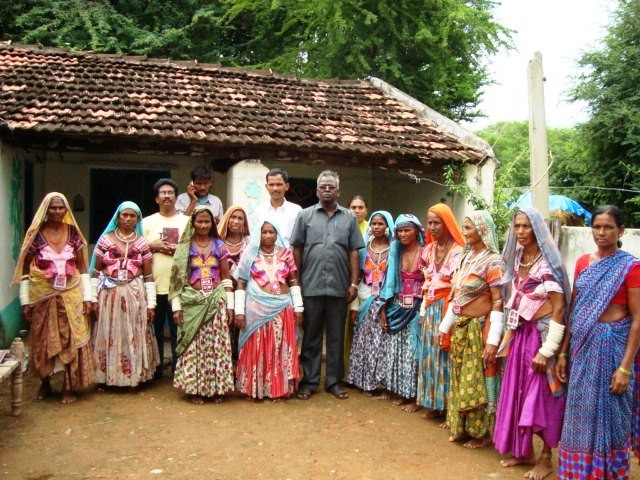 husband is alive and if she wears bangles from her elbow to her wrist it shows she has lost her husband. We were able to see that many women had lost their husbands.

Now slowly the situation is changing.  Women from this tribal community are coming to power.  For example one Mrs. Ramadevi is a Deputy Superintendent of Police  (DSP).  We saw her in the exhibition interacting with women guarded by two armed policemen.  We heard she is very powerful and feared and one Mrs. Sowmya Misra, is an IAS [Indian Administrative Service] employee.  The ruling party member in Mahabubabad is from this tribe and is also a woman.  This tribe is reserved in Mahabubabad so that no other can come to power.

Pr. Balu Nayak belongs to this tribal community.  He has a wife, Mrs. Swarna Latha and a daughter Sowmya.  He lives in a small rented house.  His father was village head and his grandfather also was village head and similarly Pr. Balu Nayak is now village Panchayat head.  By his hard work he was able to complete PG / B. Ed / PGDCA  and D. Th. (He use to walk 10 – 20 kms  every day to college).  In his school days he was inspired much by Mother Therasa, Gandhiji  etc., and has grown a deep desire for helping the poor and the oppressed in the community.  He loves his community and shares with them the love of Christ.

He is well known among Doctors, Police Department and political parties for his service to the poor.  He has very good name among authorities he was even offered a seat in the election but he refused in order to serve God and the poor.  He conducts free Eye Camps every month and

does Plantations [plants saplings of different trees for future generation to keep up the greenery environment.] and creates awareness among the people about the dangers of liquor consumption.  He conducts prayer meetings and worship services in open places in the surrounding villages.  It is very hard for him to conduct these prayer meetings when it rains.

It is also very hard for the people to come to these prayer meetings from far places because when it rains the road collapses make it impossible to reach these meetings.  It takes long time to reach these meetings so they usually leave at late night after the meeting is over.  It is hard to see these women and children disappear in dark night to their homes.

A remarkable incident happened here.  One Bro. Rajesh, a youth, met with an accident and got his left leg crushed from his hip to his toe and he almost went to the  edge of the death.   Doctors estimated the cost to repair his leg with steel rods at Rs.8 lakhs [800,000]. His parents being labourers for daily wages were unable to meet this huge expense.   Pr. Balu Nayak with his influence was able to reduce the cost to Rs.5 lakhs, and obtained financial support from kind hearted men.  Now Bro. Rajesh is able to walk.

To build a church is his deep concern for the people who have been worshipping the Lord in open places,.  After much effort Pr. Balu Nayak was able to find a land where God showed him to build a Church.   The Church land is located in a central place where people could come easily from surrounding villages. It is a quiet place and the neighbours are Christians who won’t oppose him conducting worshipping services.  Plenty of ground water is available here.  Main roads are about to come.  The cost is less compare to other places.  One Mr. Basheer is the owner of this property, who owns his own Pharmacy Shop.  To say about Mr. Basheer – he is a Muslim by birth , a kind hearted man who is also interested to serve the poor. In discussion he said being born human one has to serve the poor.  He gives free medicines to poor.  He conducts free medical camps along with Pr. Balu Nayak, and provides spectacles for the poor who have eye problems.  The night before we departed we saw Mr. Basheer sorting out medicines for the next day’s medical camp, where he will be distributing them for free.

Though rain hindered us from visiting many surrounding villages, we were able to visit as many tribal places as we could with the help of Pr. Balu Nayak and his associates.  We were able to see the burden for his people in Pr. Balu Nayak’s eyes.  After much prayer we departed to return to Chennai.”