Dear supporters and friends,
It is with pleasure that I write to you this time from Cebu, Philippines. I thank you for the continued support you give to the Advent Christian work here in this portion of God’s Kingdom..
My journey started in Manila visiting Pastor Roy Rocha and family.  Roy met me at my hotel (March 15) and took me to his home where I stayed until Tuesday morning. After a day of settling in I went with Roy and his assistant pastor, Richard Pelin Jnr to a “World Bible Study Class, which meets in an inner city office block. I have been here before. Once again I was “ambushed” and as the class was concluding a study in “faith” I spoke on the latter verses of Hebrews ch 10 ch 11 and ealy verses of ch 12 .
On the Sunday morning 6.00am service I was the scheduled speaker. The church was full with over sixty present. The early service is followed by fellowship and the Sunday School and Bible Study classes.  At 4.00pm the afternoon service began and following this clothing donated by “Rummages” of Titirangi Baptist Church was given to those who wished to take part. This box of clothing had only taken six months to reach its destination which meant that I was able to be present when it was opened. Most of the clothing was of children’s sizes and was greatly appreciated.
Again pastor Roy and his wife expressed appreciation for the money received from ACMissioNZ which allowed them to set up an IGP in the form of a Sari-sari store selling rice and other goods by small quantities. Also with the money they were able to find alternative accommodation higher up away from the river and to purchase a new fridge for the store.
Roy’s three children are all doing well in their studies and it was a joy to get to know them better.
The pre-school work is going well also. As this is not registered with the Dept Education the children need to leave at the end of Kinder 1 so that they can go on to K2 before going to elementary school.
I left Manila for Cebu and stayed with Pastor Jonathan and Flor Navacilla for a week, speaking at the church Kinder Recognition. This is the same as in Manila, Nursery and K1 only.
The morning service here is attended by about 60 people and the afternoon service, which is usually a repeat service, by in excess of that number (different people) with standing room only.  The greatest need for this fellowship is to find bigger premises where they can meet. The church building would continue to be used for mid-week activities. Funds for rental of another building also hinder the search for such a place. 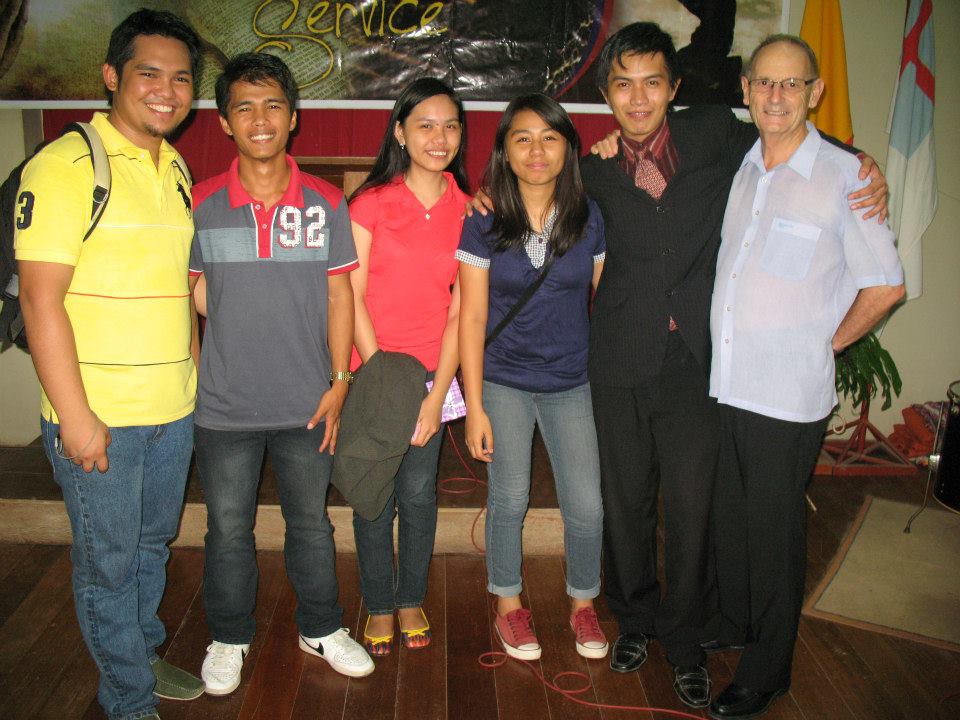 It was on again, this time to CDO, on Sunday afternoon where I was met by Mm Nely Gamayon and her husband, Pastor Reniel Comajeg and Pastor Billy Comahig. I was the gust speaker at OBC Kinder Graduation.  As OBC is recognised by CHED the Kindergarten is able to have Nursery, K1 and K2 with the K2 being the graduating class.
On the evening of that day, Monday, OBC held the Anointing of the Interns for Semester 1  and the Commissioning of the Graduates. There are four Interns who will go out to their assigned places in June until late September and five graduates who have completed their course.
The actual Graduation ceremony took place on Tuesday 25 March. Of special interest to me was Dennis Alzula who was the last of my “Dorm Boys” to graduate. In his testimony the night before he thanked the New Zealand church which had sponsored him for his last year of OBC. I add my thanks to this congregation also.
Saturday, March 30th I left CDO with Reniel and Billy for Davao to spend time with Pastor Benjie Ragas. We were met at the airport by Benjie, his cousin and her husband, who not only took us the 40kms to Benjie’s but also shouted us a restaurant meal on the way. Thank you so much!
Being Easter Sunday the service was timed for 5.30am. I again was the speaker and there were about 60 people present. In his few months there Benjie has seen some former members return to fellowship at the church and there is also a good group of young people coming along as well.
Following the morning service and breakfast I had the joy of assisting in the baptism of Dindo Marquino, Benjie’s cousin.  This young man wishes to take part in a TMI camp before entering OBC in June.  Dindo is the nephew of the late Rustom Marquino, former pastor and faculty member of OBC.
Our Tuesday flight form Davao to CDO resulted in having to go to Manila and the on to CDO on Wednesday, as the runway lights at CDO had been struck by lightning preventing night landings and take-offs, so twenty two hours after leaving Benjie’s we arrived back at Reniel’s. It should have taken about 4 1/2 hours  all told.
Thursday April 4, I was off again back to Cebu, where at Jonathan’s church, Blessed Hope Christian Fellowship, I was the speaker for the Sunday morning fellowship service. To those who remember her, Dianne Auditor (work team #1, 1990) sends her regards and blessings. At the evening service I was once again the speaker and had the privilege of dedicating Pastor Jonathan and Pastora Flor’s baby son, Chris Nathan (Nate) (my youngest “Filipino grand-son”). As well as this, both services that day were Communion services. It was great to see a group of young boys (8 -15years) there who had been invited to the service by one of the men brought in to fellowship by the basketball ministry. Again the church was full and overflowing.
It is most encouraging to me to see these young men who have at one time or another lived with me being so effective in the ministry that each of them are or will be experiencing church growing pains as buildings are no longer big enough to cope with the numbers attending. The only one at the moment whose church is not too small is Pastor Benjie, as the building had recently been added to before he took up his appointment. You, our supporters in NZ and others, have had a part in these ministries by you faithful and consistent prayer and financial assistance over so many years.
Although I did not attend the Bible Classes which are held as out-reaches of OBC I am assured that these are expanding and the associated children’s ministries are also growing. Some needs here are tarpaulins to protect the children who gather from the burning of the sun and the soaking rain. Pastor Jonathan’s church runs similar ministries on Saturdays at Umapad, another area in Cebu and they have the same problems of having children in the burning sun or having to cancel the programme because of the rain. Their only place to meet is by a wall on the side of an unpaved “basketball court”.
Others who have asked to be personally remembered to those of you who have met them are Mm Fe Mendoza,Mm Minda Lipanta, Mm Nely Gamayon, Pastor Billy, Pastor Roy, Pastor Reniel, Pastor Jonathan, Pastor James.  There is still a strong bond between those here in the Philippines and NZ. Thank you, for your part in this.
Again I thank you all for your support for the Philippine work in particular and for upholding me while I have been here. May the Lord continue to bless and use each one of you in His service.
Yours in the master’s service
Grant Aldridge
P.S.      I return to NZ on April 17th.
Previous Post: « ACMissioNZ SSE Asia Update – April 2013
Next Post: India | Bihar | New Village »