A total of 69 Advent Christian families have suffered the loss of belongings after a flashflood stricken two major cities in Northern Mindanao at the dawn of 2012. All the victims represented by 4 AC churches; 2 from Cagayan de Oro and another 2 from Iligan City have already been attended and benefited with the funds extended by our brethren who were very supportive to the Philippine Conference both in terms of finances so well in incessant prayers. Please accept our heartfelt appreciation and thanksgiving.

Victims as of this moment are trying to recover and move on not just from loss of their belongings but so well from a traumatic experience they had during the flood.

Aside from repairs which have to be done, flooded houses needed to be cleansed as they were filled with mud and so we are dreaming to have at least 2 power sprayers to enhance the same work to be done in Cagayan de Oro and Iligan Cities. 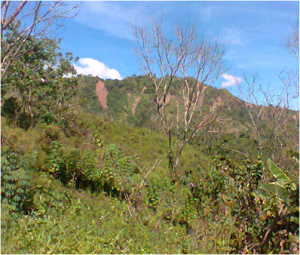 Two days before this letter was written, I got a chance together with Rucky, Pastors Pablito Molina, Mark Dotarot, Julie Pallo and Gayonan Tatao to visit and survey the reported damage by typhoon Sendong on the properties and livelihood of the church members at Tignapoloan, a hinterland barangay of Cagayan de Oro where a growing outreach work of MBC-Cagayan is situated. We took some pictures and posted in here hoping we ourselves could see how Sendong have stricken and severely caused damage to crops and properties of the residents.

On top of the hills we could see traces of landslides. They are countless but this one posted on the upper right side shows only those that flash and damaged crops that belonged to the church members in the area. Pictures below show how rocks and muds covered and destroyed the root and tuber crops which are leaned by the brethren’s source of income to raise their families.

One of the pictures above shows fellows walking on top of dried fish ponds after muds from landslide flooded over the area.

Like the victims that lived in the city, they also needed assistance.

While it is really sad looking at the negative effects of the flood to the victims, there is an opportunity for ministry now opened in those areas that are affected. Some of our pastors and church leaders are now working with the City Social Welfare and Development (CSWD) conducting stress-debriefing to victims particularly those who are in Iligan City. Two A.C. pastors in Iligan reported about a good number of home bible studies now opened after the flood hit their respective areas.

I have visited the project four times since I assumed the office of the Bishop. By this time, clearing of grasses that choked the plants is completed so that fruit trees now emerged.

Plowing the spaces between rows is now prioritized to prevent the grasses from engrossing the plants and making it ready for implementing cash crops. This is to augment income while waiting for the orchard to produce fruits.

Just recently, I went with Rucky and Pastor Patindol to the area and there we discussed and arranged the next necessary activities to be done.

As shown in pictures, some of the plants now promise to yield fruits in a couple of years. 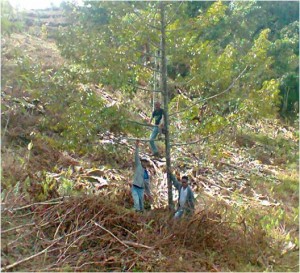 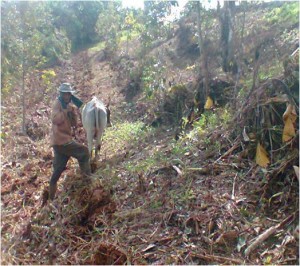 ON VISITATION OF CHURCHES SITUATED IN REMOTE BARANGAYS AT CLAVERIA

Claveria, Misamis Oriental is known to be the base of the Advent Christian Conference in the Philippines. From here, churches were born in the barangays then they went spreading through the municipality, then to the provinces and even throughout the country.

That kind of passion still lingered in the heart of the church so that even now, churches stand in a good number of localities.

This I think marks the zeal of the Filipino Advent Christians for the lost souls. But one thing that hampers ministry enrichment is the low economic condition of the people in these areas. This is how I saw it when I had my recent visit to these churches.

Pictures below show some of the church buildings constructed out of bamboos and other very light materials. Some of these are filled with people during worship services and are even thinking of extending but are hindered by financial matters. 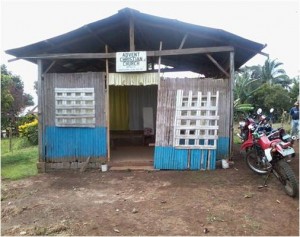 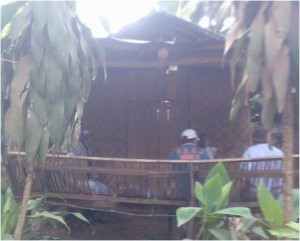 A former outreach of Tamboboan Advent Christian Church which  now officially has become an established Church at Barangay Rizal. This one is hosted by Pastor Martin Mahinay, the younger brother of the former Bishop Hermenigildo Mahinay

An outreach of Tamboboan Advent Christian Church situated at Barangay Madaguing under the care of Pastor David J. Pallo.

More pictures about this subject are posted later as I am set to visit more outreaches such as those situated in the part of Bukidnon province this coming weekend.

Note: Thank you for being there always. God bless you even more!

This letter is for you and the brethren who were so faithful enough to present their gifts so that those who lost their belongings or properties during the flood here be relieved.

I am extending my sincerest thanks and appreciation. You deserved it.

God shall surely bless you all out there!