Greetings to you and thank you for your continued support and prayers for our brothers and sisters in South East Asia who serve under the Advent Christian banner.

At this time of the year it is the rainy season in many parts of Asia and as often happens there are such huge volumes of rain that flooding occurs and property is damaged and life becomes very difficult for the people who live in those countries. 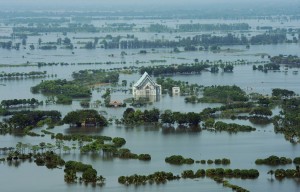 You may have read in the newspapers and seen on TV news that Thailand, and particularly Bangkok in the south of the country is suffering badly from flooding right now. See picture at right which is of the ancient Thai capital of Ayutthaya, north of Bangkok.

John Middlewood advises that where Christian Mission Naratchakwai is situated, a few kilometres to the south of Nakhon Phanom city in the north east of the country…

”Flooding around here has mostly been in the rice fields. Farmers are worried that the rice may have been under water longer than it should be, so we will wait and see. We sit high enough that most of the water runs off. My fish pond got about 8 feet or so of water – that’s rain – straight down, not run off from someplace else, so it has been a pretty wet rainy season. Something like more than 60 of the 76 provinces have been affected; some more and some less; the fate of Bangkok is still unknown. If they can get through to the end of the month, things may be okay; but there is still more rain in the forecast.” 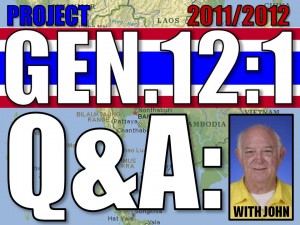 John has indicated that the effects of the heavy rains and flooding being presently experienced should not affect the GEN.12:1 WORK/ENGLISH TEACHING TEAM

which is to visit the Christian Mission Naratchakwai, near Nakhon Phanom from 29 December 2011 to 16 January 2012.

Travel and accommodation arrangements and planning at Naratchakwai in respect to the maintenance that is to be carried out on the Mission compound and the teaching of English in nearby elementary schools are well in hand for the Team, which presently stands at nine members – four from New Zealand and five from the United States. There are one or two still considering joining the Team – please pray that the Lord will give clarity of thought to them. Please also pray for those who have committed to the Team and thus to serving the LORD in Thailand, praying especially that the fellowship among Team members and with those we meet whilst at Christian Mission Naratchakwai will be a blessing for all concerned and will be honouring to the LORD and may draw some closer to Him.

John is particularly looking forward to the interaction Team members will be able to have with the young people who live with him and Maeo and with those who visit the Mission during the week and on the weekends for tutoring in their school subjects and for English lessons and for their regular Christian activities. He says that the opportunities for speaking with these young people in English will be the most valuable part of the Team’s ministry, as it will encourage them to learn to speak English in day to day life.

The situation in Myanmar is quite different for the folk who are part of the Advent Christian Conference of Myanmar. 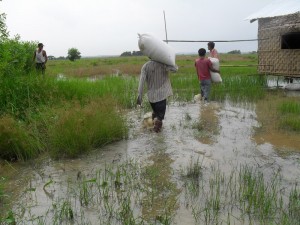 “This is our most really need and prayer request to you. This time in our land was in raining too much. Some State some rice field was destroyed by the flood. Many people lost their rice field, house and even some die by the flood. Right now we stay in bamboo house with workers, students and orphans. We would like to repair the bamboo house for classroom, worship room, cooking room, bed room, bathroom and toilet so on. Because some build[ing] had old enough to fall down and some was hit by flood.”

Victory Lighthouse {the name of their orphanage} is situated in low area. Rainy Season in Myanmar lasts 4 months. During the end of August, it rained cats and dogs. All sloped down areas were inundated. Victory Lighthouse was included. We face every year if it rains strongly. It is not easy to go to toilet. In addition, it is dangerous for children. If it rained three days, it seeps in the sleeping floor. So, it is my humble request to you to pray for this problem. Our living area needs to fill up. Please pray for us to do it in summer season.”

We (ACMissioNZ) sent some funds to assist our brothers and sisters with immediate needs, as did ACGC in the United States. Myanmar Conference leaders were very grateful for this assistance and asked us to continue to pray that their urgent needs may be met.

But in spite of the difficulties caused by the rain and flooding, their ministries continued and in early October,  Pastor D reported…

Our missionary with his first-converted-two ladies always tries to spread the gospel. They never care mud. They went to House to House or home-cell and encouraged them new believers to grow in spiritual life. He requests house owner to invite neighboring houses to come and listen His message. Some are interested in hearing melody and Guitar. So if Buddhists participate in Home-cell, he told them about who was and is and is to come. They teach songs and Bible verses to everyone so that they may know God and intimate with God spiritually. After the service they ask their difficulties and pray for them. At the same time if some are not feeling well, they lay their hands on them and pray for them. By doing this way many of them see God’s glory. Two women of participators in home cell said, “our prayer request was really fulfilled”. Finally, most of villagers know who God is and why God’s purpose for loving human beings 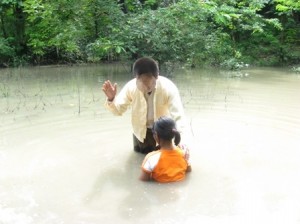 …and he further reported and sent pictures of four baptisms – in very dirty flood water!

‘His eagerness for sharing the Gospel to them is indescribable by words of mouth. Now four people convict their hearts and minds to follow God till their lives end. Praise God!! Therefore, they were baptized into water, and pray for their life journey on the earth. They decided to worship God alone in their lives. They totally forsook all idols in their houses. They said, “It is a wondrous day for us because our names are written in the book of life”. Adding, ” We are sorry for hating you, missionary, thank you so much for opening our spiritual eyes to see His light and to know who we are in His presence.”

We have been praying for several years, since our connection with our brothers and sisters began in 2004 that true democracy would return to Myanmar. In recent weeks there have been some signs that the regime may be moving in this direction.

On 26 October the New York Times reported as follows…

“After years of deadlock and stagnation in the country, change is coming, but still on the military’s terms. There is guarded hope among business people and diplomats that Myanmar may be gradually moving away from years of paranoid authoritarianism and Soviet-style economic management that has left the majority of the country’s 55 million people in dire poverty.  Since taking office in March 2011 after deeply flawed elections, the new president, U Thein Sein, a former general, has signaled a sharp break from the highly centralized and erratic policies of the past. Mr. Thein Sein’s government is now rewriting laws on taxes and property ownership and considering loosening restrictions on the media.

Our ACCM leaders confirm that some prisoners have been released and ask us to thank the LORD for this slight easing of the iron fist of the dictatorship, and to continue to pray that there may be a continuing movement towards true and complete democracy. They remind us that democracy would bring freedom of religion and would enhance their ability to openly and freely share the Gospel with their fellow Burmese people.

The evil one continues to be very active in Myanmar, and in the last few weeks Pastor J, who has a Bible College as part of his group’s ministries, reported as follows and asked for our on-going prayer for his situation.

“Dear my leaders and Friends in Jesus,

I would like to inform about what the great problem I faced recently on Wednesday 14 September 2001 to still today. Three of my professors rebelled against me that lack of financial and facility. They persuaded my students to quarrel each other. Finally, the problem that arose very small before was so serious.

Because of their silly advice, one of my student was beaten bleeding the blood by two students who follow what advice. So now my place came to be that of the place of shedding blood instead of glorifying God.  One night they came to my house and they destroyed the door to beat a student who they object that he was the one who always report what ever they inconsistently done unexampled things. The reason they came to my house was that I kept the students what they several times tries to beat. The conspiracy they have I eventually found was to lead my people astray and destroy my ministry.  Its very sorrowful and bitter what so ever they spoke and did to me.  One more sadly thing is they tries to persuaded all the students and members and leave me alone. They are ready to fight me and kill our ministries.

Please pray for us. We need your prayer support.

J”
“The snare is broken, we are escaped. Our help is in the name of the Lord, who make heaven and earth”. 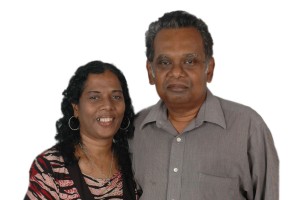 “Wilfred and I attend the monthly meetings of the Kluang Tamil Pastors Fellowship, and we also attend the meetings conducted by the English-speaking Pastors Fellowship. Last Saturday (15 October), the Tamil Pastors Fellowship meeting was held at our house. Recently, our AC Church was invited for the MALAYSIA DAY SERVICE, held at a 4 star hotel. 600 Christians attended the Combined Service. The theme was “MANY CONGREGATIONS , ONE CHURCH.” 14 Churches were represented – English speaking, Chinese speaking, Tamil speaking and Malay speaking. We prayed for the following items…

Including our family members and relatives, we now have 12 AC Church members. Our AC Church contributes annually towards the Kluang Tamil Pastors Fellowship, the Kluang Christian Cemetery and
the activities organized by the Combined Churches of Kluang. Do continue to pray for the work in Kluang.”

Please continue to pray for Brother and Sister Wilfred and Ruth and their ministries, Their group is small at this time but they are faithfully sharing the blessings of their faith with others – others from many nations and other faiths. Once again, my grateful thanks for your partnership in the Lord’s ministries in Asia.