You are here: Home / Newsletters / Special Request for Prayer – 29 November 2010

In my Update dated 19 November, I asked you to pray for a young lady named Amporn, who is one of the high school girls who are part of John and Maeo Middlewood’s team for teaching English at Naratchakwai, Nakhon Phanom, Thailand.

Amporn (pictured at right) committed her life to Jesus Christ earlier this year and expressed the wish to be baptised at a time when several other girls were to be baptised. Her parents and her mother particularly, would not give permission for her to be baptised as she (mother) claimed that she had already dedicated Amporn to the “spirits” when she was young. Amporn is one of the eight girls who are living at John and Maeo’s home and are being sponsored to attend an English Medium Programme at the local high school, and her commitment to the Lord and to His service have been very obvious in her life and in her involvement in the activities at the Christian Mission Naratchakwai and in particular in the English Teaching Teams which the Mission sends out to teach English in schools in the surrounding district.

With John Middlewood’s permission I set out below copies of emails I have received from him over the last week or so, which explain the situation which he is presently facing in regard to Amporn.

“Hi Ernie: Need help and lots of prayers. The last two days have been rather draining. It appears that Amporn is either possessed by or being strongly influenced by evil spirits. There were some changes before you guys arrived, but since you all have left, she has become two different people. At the time she accepted Christ, her mother would not allow her to be baptized because the mother said she had already dedicated Amporn to the “spirits”. Last night – Sunday night, she left her room and went to sleep in the church – said she couldn’t sleep in the room – when she prays she has visions of black cats being afraid of her. This morning – Tuesday morning, Maeo woke me up at about 3:30 or 4 am and said Amporn was up, had all the lights turned on and was wandering around outside. I went down and talked to her, she said she was afraid of the dark – this has never happened before. As I looked at her, I could see her face make drastic changes in expression and her eyes had trouble focusing. We also found out she has stopped taking her medication to control her mood swings. I prayed with her for 10 minutes or so, but need more prayer help and perhaps some suggestions. When she is “normal” she is great with the kids and wants to be a teacher – I think she would make a fantastic one, but need prayer support to get her through this.
Thanks and have a great day on your end. God bless, John”

“I agree with you about the black cats. Just finished talking with her father. He brought rice over to add to the pot. As I watched her talk with her father, I could see her switch back and forth between two different people. Her facial expressions were different, her mannerisms were different; but I am not sure her father even saw what was going on. I will keep you posted. If she still has problems tonight, we will be taking her to the doctor in the morning and try to get her back on her medication. I am also going to set up some sessions to talk with her and see if I can find out what is going on in her head right now. Thanks for your prayers. God bless, John”

“Hi Ernie: It is about 7 pm and I have just come back from taking Amporn home. Took her to the doctor this afternoon. He changed her medication and indicated that she really does have some problems. He called it split personality but I still think it is evil spirits working. When we got back home, we had made arrangements for Amporn to move into your room for a while but Maeo wanted to go talk to her parents first. While there, Amporn changed into another person; she was like a kid in a candy store. When we got ready to leave, her mother said, “you want to stay here, don’t you?” and Amporn said yes. As of right now, I don’t know if it is for the night, a couple of days or if Satan has won the battle for her. My prayer is that it will just be for the night and we can get her ready to go back to school. My fear is that her mother will not let her come back, so we will be praying here. I will keep you posted. Thanks and God Bless, John”

“Hi Ernie: … you certainly have my permission to send the prayer request for Amporn to whoever you wish. The more people you can get praying the better it will be; this is a real stronghold of Satan and I would dearly like to see it broken and see Amporn’s mother (not real) brought into the light of God so she can see what she is doing and stop.”

“It is Sunday evening here. Had a good service with 37 people, but it was not the same with Amporn missing. Her students were asking about her yesterday and today. We went to visit after church this morning, but Amporn was not home. The story we got was that her mother had taken her to a doctor in town to get shots and be put on IV’s. According to the story, Amporn did not sleep all night and has refused to take her medication. The story continues that mother is going to take Amporn to the psychiatric hospital in Udorn if she doesn’t get better. It would seem to me that she would take her to the local hospital where she has been going, but I am afraid that isn’t going to happen because they would know the real story. Amporn called me about 5 am saying she wanted to come back to stay with us; said nothing about not sleeping all night and said nothing about not taking her medications. So, at this point other than pray, I have no clue as to what to do. It would appear that mother is not going to let us get near Amporn to talk to her; and at the moment, it looks like the only way she can avoid the torment that is going on is to recant. The neighbor said she had been singing religious songs and mother uses that as proof that Amporn is crazy and that being a Christian is hurting her. I am going to try and talk to Jarat – the Thai pastor you met here and visited his church – tomorrow and see if he has any suggestions. Please keep praying both for Amporn and me that we can get through this thing and that all will come out well and be a testimony to the power and the love of God.
Thanks and God Bless, John and Maeo” 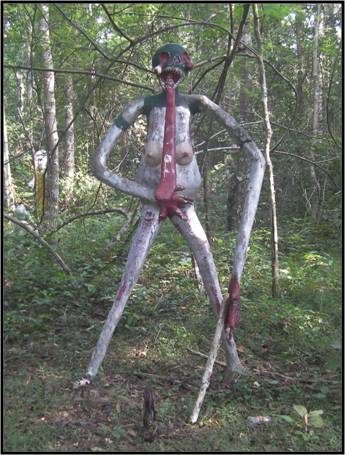 Spirit worship is very prevalent in the area where John and Maeo are ministering, and Amporn is not the first young person who has been forced by family, and/or peers and/or the Buddhist monks, to recant their commitment to Christ. The monks use the threat of evil spirits to turn those who show interest in Christianity or any other faith back to Buddhism. The picture to the right is one of a group of statues, very close to a Buddhist monastery in the area, which depict the evil spirits which they worship and use to frighten people like Amporn – as you can see they are not very pleasant!

Can I ask you to pray on a regular and ongoing basis for Amporn and her parents and for John and Maeo as they grapple with this difficult situation. I will keep you advised of developments as they occur.

Pray that Amporn and her parents may be freed from the bondage that they are experiencing at this time and pray that John and Maeo may have great wisdom and be protected from all evil.

I thank you for your prayers and for your partnership with John and Maeo and their ministry in Thailand.