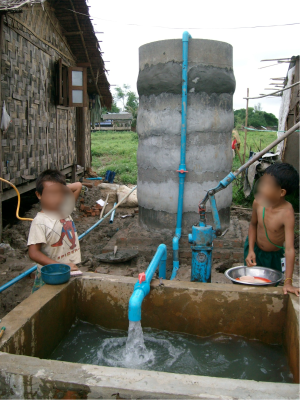 Our Myanmar leaders are very grateful for the wonderful assistance from the ladies of the Central Region Women’s Home and Foreign Mission Society in the United States who have given so generously to provide good water supplies for them and their members. Two wells have already been drilled and are providing ample supplies of good, clean drinking water to many members of our churches and to their neighbours. The leaders are determined to share their blessings with their Buddhist neighbours! Two further wells will be drilled in the very near future and there are still funds available for one or two more – the latter wells will be drilled at the homes of the pastors of some of their branch, outreach churches.

Leaders advise that some of those who had contracted dengue fever have recovered well, but more of the children and some of the adults, including some pastors, have now contracted the disease. Please continue to bring these folk, and those who are caring for them, before the Lord in prayer.

The ruling military junta in Myanmar (who call themselves the State Peace and Development Council (SPDC)) announced on 13 August 2010 that multi-party general elections are scheduled to be held in Burma (officially Myanmar) on 7 November 2010 in accordance with the new constitution which was approved in a referendum held in May 2008.They indicated that the general election forms the fifth step of the seven-step “road map to democracy” proposed by the SPDC in 2003, the sixth and seventh steps being the convening of elected representatives and the building of a modern, democratic nation, respectively.

Sadly, this is not as positive as it sounds! One commentator describes the situation like this…

“Not surprisingly the whole thing is a ruse — as the 2008 constitution that the junta dictated guarantees that 25% of the Parliaments’ seats will go to the military. It’s kind of hard for an election to be free when 25% of the outcome is already decided by law.”

“A 2008 constitution adopted as part of the junta’s “roadmap to democracy” stipulates that 25 percent of parliamentary seats go to the military. It stipulates that no amendments to the charter can be made without the consent of more than 75 percent of lawmakers.”

“Foreign governments have urged Myanmar to ensure the polls are open, fair and include the party of detained pro-democracy icon Aung San Suu Kyi. But her party already had decided to boycott the vote, saying the junta imposed unfair rules including ones that effectively bar the Nobel Peace laureate from being a candidate.”

“The junta’s date for the elections came as yet another symbolic blow to Suu Kyi’s chances of participating — they will fall just days before her latest term of house arrest is due to expire on Nov. 13.”

“Suu Kyi’s party won a landslide majority in the 1990 election. But the junta refused to honor the results and has kept her locked away mostly under house arrest for 14 of the past 20 years, ignoring global pleas for her freedom.”

We therefore need to continue to pray that the Lord will restore true democracy to Myanmar so that the present prohibitions on Christian ministry and worship will be replaced by true freedom to worship, and all the people of the land will be freed from the burden of oppression that they currently bear.
Use GoodSearch www.goodsearch.com or Google to read more information on “Elections in Myanmar”.